A woman is writing her story while making history on the football field!

Free Safety Antoinette “Toni” Harris, a native of Detroit, has the sports industry buzzing as word gets out that she received an invitation to play at Bethany College, a school in Kansas.

Truly grateful & blessed to announce that I have received an football offer from Bethany College! 🏈‼️ #GOSWEDES💙💛 pic.twitter.com/1fd3Mf5qdg

According to Yahoo Sports, Harris is believed to be the first female to have received a scholarship for a position other than kicker in the history of college football.

Though Harris has been playing the game since her youth, people often tried to talk her out of pursuing her passion. “All the time. They still do. People tell me like ‘oh it’s cool you play football… but you’ll never make it… and you shouldn’t be doing it,’ ” Antoinette told CBS Los Angeles.

“A lot of coaches didn’t believe in me,” Harris told ESPN. “A coach told me nobody’s ever going to play you to be at the next level. In the end, you’ve got to push yourself. I’m going to focus on my goals.” We are so glad she didn’t give up her dream! 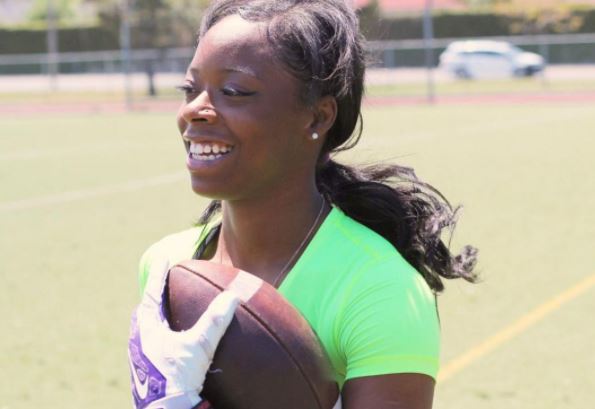 Harris has proven that she is indeed a fighter off the field as well, tackling life’s many obstacles very early on. She became a foster child at four, and was adopted nine years later, according to CBS Los Angeles. When she was 18 years old, she found out she had stage one ovarian cancer. Although she conquered those battles, she wasn’t sure if she would be able to play football again.  “You have to overcome your fears if you want to play this game,” she said.

This wonder woman doesn’t plan to stop at college ball! “My ultimate goal is to excel at a four-year [university] and become the first female NFL player. I know I can get there,” she said in an ESPN interview.

We hope to see her blazing trails in the NFL one day, and one day soon. With this amazing testimony, Antoinette has proven we should never say never!